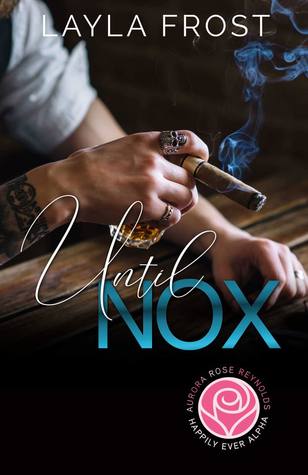 Until Nox (Hyde #3) by Layla Frost

Not all heroes are good guys.

With a body count on his soul and blood on his hands, Killian Nox lived in the gray. Ruthlessly single-minded, if he wanted something, it was his. And when it came to the gorgeous lass with a fiery attitude, he didn’t just want her.

With southern-bred manners and a snark all her own, Augusta ‘Gus’ Allan was a connoisseur of cheap wine, delicious Mexican food, and good TV. Unfortunately, her taste in men wasn’t as well-developed. When her knight in shining armor turned out to be a douche in tinfoil, Gus never expected her real hero to be a sexy-accented, tattooed beast of a man.

But he was exactly who she needed.

This Happily Ever Alpha Kindle World novella is a crossover of The Hyde Series and Aurora Rose Reynolds’ Until Series. It features glimpses of familiar faces from Hyde and Seek, Best Kase Scenario, and Until November. However, it can be enjoyed as a standalone.

4 Until Nox Stars on Goodreads

This was my first read from Layla Frost. I was introduced to her books through the Happily Ever Alpha Kindle World that was created by one of my favourite authors Aurora Rose Reynolds. I noticed they where all on Kindle Unlimited and decided to give a few of them a shot. Boy am I glad that Until Nox was the first one to read, although I probably should have started with the first in the Hyde Series but not to worry I will go back for them.

There was only so much perfection one woman could put up with. Killian was smart. He was sweet. He was dangerous, imposing, intimidating, funny, soft, tender.
Intense.

Killian Nox is not the good guy but he’s not that baddest of them all either. He has me on his side from the start. Augusta “Gus” Allen is my kinda heroine. She’s fun and not afraid to speak her mind. She is a bad-ass woman who can look after herself! I love a good leading lady and she had it all for me. Not only did I love these two but I also loved her secondary characters and as everyone who reads my reviews knows this is what makes a great story for me. I’m off to read Until Mayhem….

One thought on “Review: Until Nox (Hyde #3) by Layla Frost”