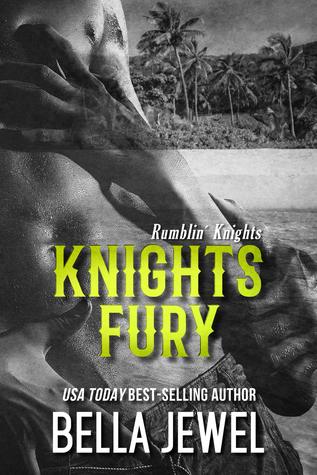 My name is Finn.
The broken one.
The one everyone worries about.
The one who will probably never have it together.
I’m the quiet one.
My eyes don’t smile.
My heart doesn’t love.
I was hurt the most.
I’ll never recover.
Those are their words.
They aren’t mine.
The truth is, nobody really knows who I am.
Not a damned soul.
And they probably never will.
Because I’m tired of people feeling sorry for me.
I’m tired of living under the Knight command.
Keeping the reputation.
Maybe, just maybe, I’d like to be something else.
Because, screw the Knight name.
It means nothing to me.
But her…well, she might just mean something to me.
My name is Finn.
I guess you’ll just have to read this one to know my story.
My true story.

Knights Fury is the second book in Bella Jewel’s Rumblin’ Knights series. This is the story of Erin and Finn. Finn is one giant manwhore and Erin has been his friend with benefits for a while, her only stipulation is that when he’s sleeping with her he can’t be sleeping with anyone else… Sounds easy enough… but not for Finn.

I’ve mixed feelings about this book. I did like it, but I felt like there was conflicting things said throughout. The fact that Erin is so vocal that she hates liars but seems to do it herself throughout annoyed me. When she follows Finn that was all kinds of wrong. But that aside I did enjoy the story and loved that she includes so many past characters and we see more of the future ones. I love forward to Book 3 in the series.