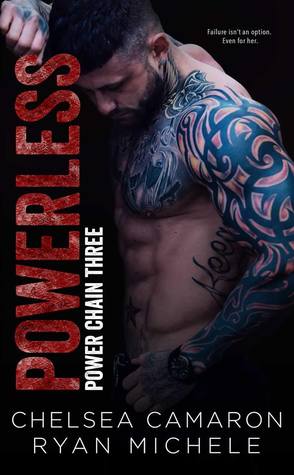 Failure isn’t an option. Even for her.
She was beautiful.
It was dangerous.
She was fierce.
It made her a target.
She was loyal.
It would be her downfall.
I am Dane Anderson.
I’m powerless to my attraction to her, even if she’s my next job. As a hitman in an underworld she can only fear, I have a reputation to uphold.
She will learn, no matter how innocent she is, I never fail on a job …
Including her.

Powerless is the third installment in the Power Chain Series. Ryan and Chelsea have already delivered amazing stories with the first two books in the series. This is Dane and Aspen’s book. Although I loved this book it wasn’t as kick ass as the first two in the series. I did love Aspen she was strong and independent, well able to handle her business. She doesn’t need anyone to save her. Nut kicking ass gets lonely on your own and she can’t help but let Dane into her life.

Like I said not as gritty as the first two in the series, but brilliant in its own right. I would recommend reading this book, but read the series in order or else it kinda spoils the other books.