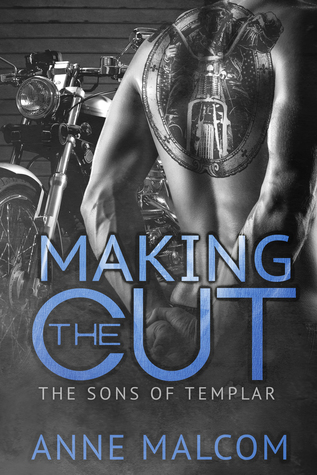 Making the Cut (Sons of Templar MC #1) by Anne Malcom

Gwen Alexandra does not need a man in her life. Especially not a man who looks like Chris Hemsworth and Joe Manganiello’s love child. One wearing leather, riding a Harley, and covered in tattoos.

Gwen can bet every pair of her Manolos that Cade Fletcher is trouble. From the moment she meets him, the attraction sizzles between them. Gwen has a problem when it comes to attractive men in motorcycle clubs. The last one she got involved with almost killed her.

After healing physically, Gwen decides to get a new start in a small town, half a country away from the man who nearly cost her her life. She isn’t in town five minutes when she runs into Cade, a man that is too sexy and dangerous for his own good.

She tries to keep away from him, to ignore the attraction between them. But the biker has other ideas, soon she is in way over her head. Her heart, and her life are in danger once again.

Making the Cut starts of quite graphic, with a brutal attack on Gwen. Not for the faint hearted I tell you. Not only is she attacked but its by her biker boyfriend. Fast forward a year and Gwen has decided she needs to start all over again somewhere new. She moves along with her best friend Amy and they open their dream shop. Gwen has no intentions of getting involved with anyone anytime soon, but life has a way of dropping things in your path whether you want them of not.

This was a really enjoyable read, I could feel their connection straight off and was really invested in the both of them throughout the book. This was mainly told in Gwen’s POV, but it had a few parts in Cade’s POV. I would have liked more. I also love great secondary characters and this book was not short of them. Amy was brilliant and so where a lot of others. A line up for other books within this series which is very smart. Also free on kindle unlimited.

This was my first read from Anne Malcom and it definitely wont be my last, I’m dying to read the next book in the series.

6 thoughts on “Review: Making the Cut by Anne Malcom”