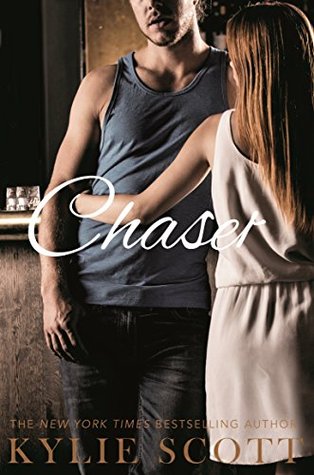 Given his well-earned bad boy reputation, Eric is having a tough time scoring.. When single Jean moves to town, she seems heaven sent by the sex gods. Only problem is, she not only wants nothing to do with him, but it turns out that she’s pregnant.

Starting over in a small town, Jean is determined to turn her wild lifestyle around and be the kind of mother she always wished she’d had. Since local bar owner and all round hottie, Eric Collins, is now determined to steer clear of her pregnant self, it should be easy. When she goes into labour during a snow storm and her car slides on some ice, it’s Eric who comes to the rescue.

There seems to be a bond between them now, but is it enough? And can Eric give up his manwhore ways to be the man Jean needs?

Chaser by Kylie Scott is the third book in the Dive Bar Series and it was not what I was expecting at all. Eric is part owner in Dive Bar and he has a new woman in his bed ever night. He is up front with them all that he is not into commitment and is just in for a good time. Not one of his friends thinks he can be celibate for any amount of time, So Eric plans to put them all in their place and prove them wrong.

Jean is pregnant and has no one but herself and a few friends and she is going to prove to herself and her parents, who have abandoned her that she can do this on her own.

Both out to prove that they can do it, the two end up bounding and becoming fast friends. No one believes Eric when he says he just wants to be friends and help Jean out. So much so that Jean is warned against him, but Jean sees a different Eric that maybe his friends haven’t seen before. Like always I love great secondary characters and this book has this in spades.

This was a bit of a surprise for me, it was so sweet, funny, and so emotional, I couldn’t put it down and the spark between Eric and Jean was epic and I couldn’t get enough of their story. Eric might just be my new favourite in this series.