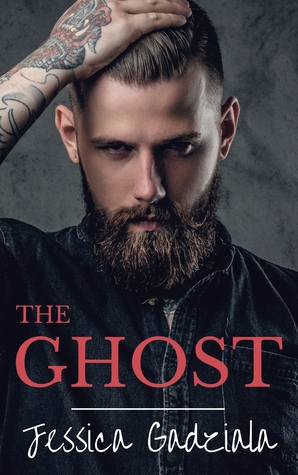 The Ghost (Professionals, #2) by Jessica Gadziala

Sloane has everything she thought she ever wanted- a great career, a great apartment, great clothes, a life she had worked hard for.

Until one night, one chance encounter, one decision that changed everything.

With no options left, she enlists the help of Quinton Baird & Associates, who promptly inform her that she has to leave it all – the career, the apartment, the life she had worked so hard to build for herself – behind.

If all that wasn’t enough, her entire future – and life in general – was in the hands of a man whose coworkers called ‘The Ghost.’ Because that was what he did; he ghosted people, hid them, gave them new lives, made them impossible to find.

With no other choice, she agrees to his terms, climbs in a car with him, and travels almost clear across the country toward her new life. But the long hours on the road – and even longer hours in cabins and hotel rooms – together start to show her things. Like how unhappy she had actually been, how hollow her life was, how much she had denied herself in the name of superficial success.

And maybe, just maybe, how much she was starting to see how wrong first impressions can be, and how much a person can begin to mean to you when you decided to let them in…

5 The Ghost Stars on Goodreads

Where do I start… The Ghost is the second book in the Professionals series by Jessica Gadziala.

From the get go I had so much admiration for Sloane. She keeps her cool even though she is in so much pain, mentally and physically.

She has witnessed an awful crime and has to leave her life, her company and everything she has worked so hard for in her life. Gunner assumes conclusions from her appearance but he can see that she’s in pain and in his gruff way does want to help her.

Being stuck in a car and road tripping it across the country helps melt some of Gunners gruffness and grouchiness towards Sloane and he begins to see the real woman behind the designers clothes.

I hardly trusted anyone.
I barely trusted myself.
But I trusted him.
Implicitly.
Without hesitation.
That, well, was terrifying.
Because I could get used to it.
And I was only going to lose it.
Sooner rather than later.

These two were made for each other and the chemistry coming from them was exciting, I just couldn’t wait to read their story. I couldn’t put this book down. I read it in one sitting and that says a lot, I rarely get to do this anymore. As always there was a great epilogue and I loved hearing about the other men within this series. I’m very excited for more in this series.

One thought on “Review: The Ghost (Professionals, #2) by Jessica Gadziala”