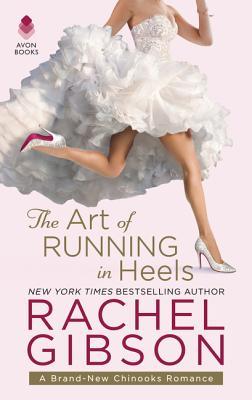 Running in five-inch stilettos is an art form

Leaving your fiancé at the altar on live television is a disaster. Lexie Kowalsky thought she was ready to get married in front of millions of people, but at the last minute she fled the set of television’s hottest reality show, Gettin’ Hitched. Wearing a poofy white dress and a pair of five-inch sparkly shoes, Lexie hopped a float plane for Sandspit, Canada. She figured no one would find her there. But she was wrong.

Sharing her flight was the Seattle Chinooks biggest star, Sean Knox. Lexie wasn’t just a reality-show runaway, she was his pain in the butt coach’s daughter. She was chaos and temptation and definitely off limits, but getting her luscious body out of that wedding gown, he couldn’t resist getting her in his bed for one amazing night.

Then a photo of Sean and Lexi breaks the internet—and suddenly they’re both swept up in a crazy plan to spin the whole story. But you can’t run from love—

This book takes place 20 odd years after the first book in the “Chinooks Hockey Team” series. I’m a big fan of this series and for some reason I missed the release of this book! Lexie and Sean met under circumstances very similar to the way her parents, John and Georgia met in Simply Irresistible. She’s on the run from a wedding and needs a getaway person. Sean happens to be in the right place at the right time to save Lexi’s ass. Soon she has him roped into a fake relationship to get her back on her feet and help her save her company.

This was a cringe and Laugh-out-load book at times. I felt so sorry for both Sean and Lexi at times. For two very smart individuals they really both needed a wakeup call. I loved that Lexie ended up finding someone who is in the hockey family and I loved revisiting Georgie and John Kowalsky, catching up with older characters within the Gibson’s Hockey world is always nice.

Overall this a lovely feel good romance read that kept me entertained to the end.

Rachel Gibson began her fiction career at age sixteen, when she ran her car into the side of a hill, retrieved the bumper, and drove to a parking lot, where she strategically scattered the car’s broken glass all about. She told her parents she’d been the victim of a hit-and-run and they believed her. She’s been making up stories ever since, although she gets paid better for them nowadays.

5 thoughts on “Review: The Art of Running in Heels by Rachel Gibson”