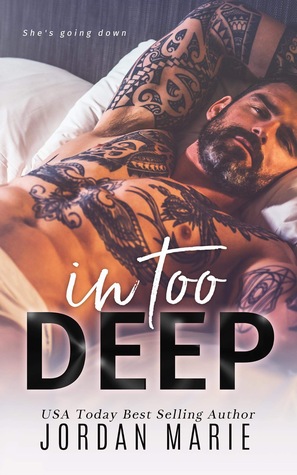 I did a bad thing.

I did a really bad thing.

I’m not a bad person, I swear. I just made a few mistakes.

Mistake number one was agreeing to rent my hotel out to an insufferable a**hole, named Aden Smith­.

Mistake number two was ignoring his threats to sue me when he handed over a list of items he deemed “unacceptable”.

Mistake number three was diving into the pool to save his life when he fell. It would have been less complicated to hide his body.

When the hospital refuses to let me know how he is, I panic.

Claiming to be his wife might be my biggest mistake yet—especially when he believes me!

He might have been the one drowning, but I’m sinking in a bed of lies, going down fast—and there’s not a rescue in sight.

4 In Too Deep Stars on Goodreads

Well I never! Aden just came across so badly at the start of this book. He was a giant Jack-ass! He had a big chip on his shoulder regarding women and he’d been burned very badly before but I think his attitude towards Hope was just awful and if I had been her I would have found it very hard to get over the things she over hears him saying about her.

Even with all of that I really enjoyed this book. It was funny in parts and “OH my god he didn’t” in other parts. Hope just kept digging that hole for herself and I was kept on my toes through the whole book and read it in one sitting. Totally recommend it to anyone who is looking to disappear into a book for a few hours and enjoy themselves. Jordan Marie has become a must read for me and most of her books are on Kindle Unlimited on Amazon.