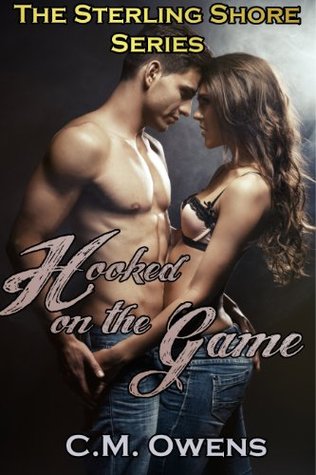 Hooked on the Game (Sterling Shore Series #1) by C.M. Owens

Everyone has secrets that define them, a past that has shaped them, and a game they play – whether they know it or not.

Despite the fact they live next door to each other, Kade and Raya have never made an effort to speak, until a wild party, four frat boys, and… a bulldozer.

Sterling Shore was supposed to be a new start for eighteen-year-old Raya Capperton. Everything was working out perfectly until her two roommates were expelled for a prank, leaving Raya with the house she couldn’t afford on her own. Fate intervenes before she has the chance to find a new home, but she struggles to decide if it’s divine luck or the devil’s cruel sense of humour.

Twenty-one-year-old Kade Colton has his life planned out, and everything he does is an elaborate game to aid him with his future endeavors. Coming from money has made Kade’s life easy, but he wants to build his own name – his own future. The thing he doesn’t realize… when you only put forth superficial effort, you only acquire superficial friends.

Raya is torn between being amused or disturbed by Kade and his philosophy, but the drive behind his determination isn’t what Raya expected. Little by little, her hatred fades and is replaced by emotions she never would have believed she could have for the rich jerk she desperately doesn’t want to care about. Too bad you can’t force yourself not to care.

The problem is… Kade’s shiny name can’t be tarnished, and Raya has a jaded tie she can’t cut loose. Nothing about them can work, nothing about them makes sense, but nothing can seem to stop them from trying.

4 Hooked on Kade Stars on goodreads

I’d heard about this series from some Book Buddies from a facebook group I’m in and I’d never heard of it. I was wondering how that could have happened! So a friend sent me the first few books and I dove into this series. I am so glad I did. What a great find!

I loved the story line, Raya is the daughter of a conman. She is a freshman in college who lives next door to rich party boy Kade, who appears to be a senior at the same school. During a party at Kade’s house one night, some drunk frat boys got into a bulldozer parked at a nearby construction site and mowed down her house. Raya, who is in desperate need of money, takes the offer from Kade’s father to move in with Kade for a few months.

Both Kade and Raya where likable characters. I loved the Kade, he’s a good guy who gives the impression that he likes to party and is player, be really he isn’t. He has Raya’s best interest at heat from day one. But of course Raya doesn’t know this.

Very good start to the series, and can’t wait to get stuck into the next book in the series.

One thought on “Review: Hooked on the Game (Sterling Shore Series #1) by C.M. Owens”