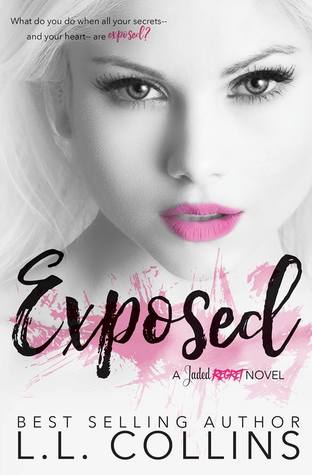 What do you do when all your secrets– and your heart– are exposed?

Natalie Anderson has spent her life being strong for everyone else, always putting herself last. But that has come with a price because the stress and secrets are affecting every part of her life. Looking and acting the part is one thing, but feeling it is another. She knows she’s at a crossroads and she needs to make a change, starting with loosening up and living a little.

Kai Pierson is done being a grunt. He’s finally worked his way up the ladder and he now finds himself a rep at the hottest label, representing the hottest band in all of rock music. He’s living the life…alone, but he’s okay with that. It’s the way it needs to be.

Though they’ve never met in person, they become friends and spend hours talking about life. When the chance to meet arrives, neither of them are ready how they feel when they see each other for the first time.

But when Natalie’s secrets are exposed, will she be able to put it all behind her and find her own happiness, or will the lies destroy her once and for all?

This was my first book from LL Collins, You can read this as a standalone book but I would have liked to read the other books in the series first. But alas life got in the way and I just had to dive straight into it. Exposed is the 4th book in the Jaded Regret series and is based on Natalie.

Nat has spent most of her life trying to look after everyone else and shying herself into the back round as much as she can. But she has come breaking point and all the lies and secrets are coming crashing down on to of her and she knows she can’t go on the way she has been going.

Kai has worked hard and is now a rep at the hottest label in New York, representing the biggest rock band in the world.. He’s living the life, however he’s doing it alone. This is what he wants though… or is it?!

Nat and Kai have never meet. But they have become best friends. Business comes up and they have to meet in person. The feels that is between them is of the charts and I don’t think either of them where ready to feel so hard.

Exposed is told from both Nat and Kai’s point of view. LL Collins tackles some series issues in this book from eating disorders to foster care. She has tackled these issues so well and shows us how it can effect a person and their relationships around them. I thought she did an excellent job

This story was a heart wrenching and an emotional roller coaster for me and I really loved it. I will be checking out the rest of the books in this series.

LL Collins is the self published author of the bestselling Living Again Series, the Twisted series, Back to the Drawing Board, and the Jaded Regret series.

LL has been writing since she was old enough to write. Always a story in her head, she finally decided to let the characters out and start writing and try to make her lifelong dreams of becoming an author come true. She has been a teacher for over ten years and lives in Florida with her husband and two sons.