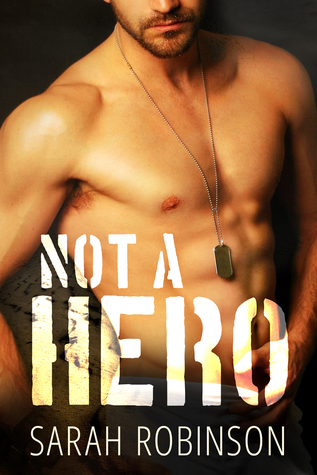 Not a Hero, A Marine Romance by Sarah Robinson

From the bestselling author of the Kavanagh Legends MMA series, Sarah Robinson’s Not A Hero is an emotional standalone military romance where love battles trauma, and there can only be one victor.

Former Marine, Miles Kydd, is trying to readjust to civilian life after ending his career and returning to his small home town when he learned his father was diagnosed with a terminal illness. Once the town hero and star quarterback, Miles no longer feels like the man he was, or who he’s expected to be—possibly because his demons have followed him home from Afghanistan.

Meeting Zoe Brooke, his father’s live-in nurse, gives Miles the slightest glimmer of hope that he can still find happiness despite the dark secrets he holds inside. The chemistry between them is undeniable, and together they are explosive—in more ways than one.

A helper at her core, Zoe is more than willing to care for Miles’s heart, but not at the expense of her own, and she’s not afraid to tell him that. She knows what having a painful past is like, and she wants to help him with his, if he’ll let her.

Things get complicated fast when Miles realizes burying his secrets isn’t actually the same as healing from them and if he wants the girl, he’s going to have to tell her the truth—the one thing he can’t do.

We have Miles is a Marine who has just returned from Afghanistan and is now officially a civilian. He also comes bearing battle scars from war. And the we have Zoe Brooke. Zoe went to school with Miles, although many years have gone by, and they both have changed since those days. Zoe has scars of her own. Their lives cross paths when Miles returns home and finds Zoe is his father’s live in nurse.

“War isn’t black and white, good and bad – only a ton of gray. You have a split second to decide between a shitty choice or a crappy one.”

Not a Hero is a touching contemporary romance that takes real life issues. I wanted to love it, I really did. But I didn’t and in the end was a little disappointed.