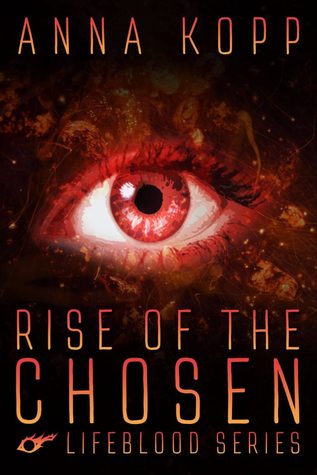 Rise of the Chosen (Lifeblood #1) by Anna Kopp

In Sam’s world there are two rules. Rule #1: Nobody dies. Protect the living at all costs. Rule #2: Everybody dies. At least once.

The Waking was a global event in which a force called the Lifeblood invaded all humans who died. The few strong enough to control it came back as powerful immortals. The rest let the bloodlust take over and awoke with one goal – to kill.

Newly appointed Watch Guard Samantha Shields has a legacy to uphold. Her father died a hero defending their city and now she wants to follow in his footsteps. Except for the dying part, of course. Unfortunately, fate has other plans as she discovers deep dark secrets that make her choose between her loyalties and the lives of everyone in her city. Both rules are in play as Sam is forced to make hard decisions that could cost her everything – including the person she cares about most.

I am a writer from Ohio, though I was born and raised in Russia. As a child, reading and writing for me was basically like breathing. My parents’ idea of “grounding” me was kicking me outside to play. That passion hasn’t waned even after having to learn a new language.

I’m a US Army veteran, a wife and business partner to a software developer, and a mom to two rambunctious boys.

I love reading, writing, and playing World of Warcraft. I’m a true geek at heart and would love nothing more than to see my imagination become a part of something greater.