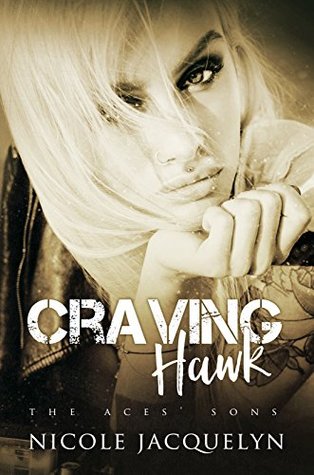 Tommy Hawthorne thought Heather Collins was sexy. It didn’t matter what color her hair was or how many piercings she added to her face. She just did it for him.

Unfortunately, when they were kids she only had eyes for his baby brother, and when Mick died, Tommy lost all contact with Heather.

A few years later, they’re thrown together when the Aces and Eights Motorcycle Club goes on lockdown.

Tommy isn’t the cocky boy Heather remembered. He’s angry with the world, and he can’t seem to harness his rage or the nightmares that wake him up in a cold sweat every night.

But one thing hasn’t changed.

Another great installment from Nicole Jacquelyn. She can do no wrong. If your into Mc and haven’t picked up one of her books yet, you’d do right by picking them up.

Craving Hawk has, drama, romance, and a shit load bikers that only the Aces’ Sons can give.

As always I love that the original members still get a look in and I can’t wait for the next in the series.