There’s something about ‘Rumble Fish’ that makes me read it a few times every year.

S.E. Hinton writes more like a noir writer than a YA one, complete with flashbacks, delusional madness and death. Her uncanny ability to get into a teenage boy’s mind and do so with intensive insight is nothing short of remarkable.

“Even the most primate societies have an innate respect for the insane.” 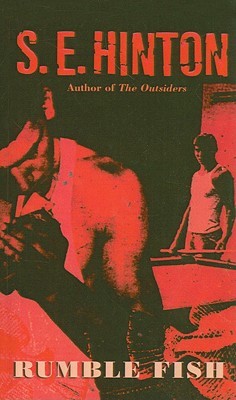 Rusty-James is the toughest guy in the group of high-school kids who hang out and shoot pool down at Benny’s, and he enjoys keeping up his reputation. What he wants most of all is to be just like his older brother, the Motorcycle Boy. He wants to stay calm and laughing when things get dangerous, to be the toughest street fighter and the most respected guy on their side of the river. Rusty-James isn’t book-smart, and he knows it. He relies on his fists instead of his brains. Until now he’s gotten along all right, because whenever he gets into trouble, the Motorcycle Boy bails him out. But Rusty-James’ drive to be like his brother eats away at his world–until it all comes apart in an explosive chain of events. And this time the Motorcycle Boy isn’t around to pick up the pieces.

“Stylistically superb. . . . This packs a punch that will leave readers of any age reeling.”—School Library Journal, Starred

“Sharper in focus and more mature in style than Hinton’s The Outsiders.”—Booklist

S.E. Hinton, was and still is, one of the most popular and best known writers of young adult fiction. Her books have been taught in some schools, and banned from others. Her novels changed the way people look at young adult literature.

Susan Eloise Hinton was born in Tulsa, Oklahoma. She has always enjoyed reading but wasn’t satisfied with the literature that was being written for young adults, which influenced her to write novels like The Outsiders. That book, her first novel, was published in 1967 by Viking.
That Was Then, This Is Now is known to be a much more well thought out book than The Outsiders. Because she read a lot of great literature and wanted to better herself, she made sure that she wrote each sentence exactly right. She continued to write her two pages a day until she finally felt it was finished in the summer of 1970, she got married a few months later. That Was Then, This is Now was published in 1971.

In 1975, S.E. Hinton published Rumble Fish as a novel (she had published a short story version in a 1968 edition ofNimrod, which was a literary supplement for the University of Tulsa Alumni Magazine).

Once published, The Outsiders gave her a lot of publicity and fame, and also a lot of pressure. S.E. Hinton was becoming known as “The Voice of the Youth” among other titles. This kind of pressure and publicity resulted in a three year long writer’s block.

Her boyfriend (and now, her husband),who had gotten sick of her being depressed all the time, eventually broke this block. He made her write two pages a day if she wanted to go anywhere. This eventually led to That Was Then, This Is Now.

The latter was apparently wrong. Tex was published in 1979, four years after Rumble Fish. It received great reviews and people raved about how the writing style had matured since previous publications. Tex would be the last book S.E. Hinton published for nine years. After another span of four years, S.E. Hinton’s son, Nick was born.

Four years after Tex was released, quite a few major events took place in S.E. Hinton’s life. In March of 1983, the movieThe Outsiders was released. The following August, Nicholas David was born. Two months later the movie Rumble Fish was released.

In 1985 the movie version of That Was Then, This Is Now was released. Three years later S.E. Hinton became the first person to receive the YASD/SLJ Author Achievement Award, which was given by the Young Adult Services Division of the American Library Association and School Library Journal.

Taming The Star Runner was released in October of that year. It was the first book that S.E. Hinton had published that wasn’t in first person. With a seven-year wait, S.E. Hinton released another book in 1995. This time she did something that no one expected.

Big David, Little David was written for children around the kindergarten age. This deviation from Teen fiction seems to be a reflection of the current important things in S.E. Hinton’s life: Family. The children’s fiction trend continues with her latest release- The Puppy Sister, which is a fantasy book written for Elementary school level children.

S.E. Hinton currently lives in Tulsa, Oklahoma with her husband David. Her son Nick is away for college.

7 thoughts on “Oldie but a Goody Wednesday: Rumble Fish by S.E. Hinton”