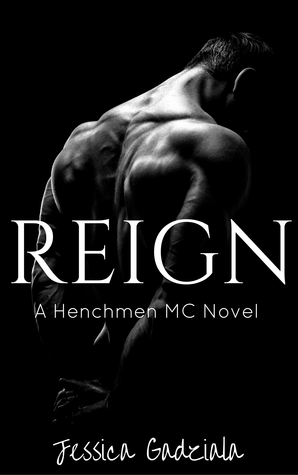 1 notorious 1%er
1 innocent trapped in an impossible situation
1 viscous crime lord
3 people who aren’t who they appear to be
= one big (bloody) mess.

Reign is no stranger to the criminal underbelly and hard life, but when a random woman comes (literally) crashing into his life- learning things she has no business knowing, and bringing with her the weight of the city’s biggest skin trader, the “hard life” starts to take on a whole new meaning.

I was so surprised by this book! I had never heard of Jessica Gadziala before and to be honest I would never have bought this book. I picked it up from kindle unlimited. I loved it and I love that I now have the whole series (Both of them) to catch up on!

He swept in all badass Prince charming and saved me.

I loved Reign from the start and even Summer was very likable through the whole book.
The story was great and I liked the few little twists towards the end.

So I didn’t realise that there was an order in which her books kinda needed to be read in and so I’m giving ya’ll a head up. Below is the order in which it would be better to read her books in. I skipped the first two as after I had read Reign I wasn’t going back. Maybe again but not now!

For A Good Time, Call…

Jessica is a full-time writer from New Jersey who believes coffee is a food group and that her parrots can totally understand her when she talks to them. She can not be trusted with houseplants or to respond to text messages in a reasonable amount of time.

Writing was the only acceptable career path for her from the first time she learned that with just twenty-six letters, she could create whole new worlds. She attempted a string of odd jobs before quitting and taking the blind leap of faith that was trying to make a career out of her passion.

Jessica is a firm believer in snark, strong secondary characters, and HEA.

When she is not writing (which is practically never), she is obsessively trying to read as many books as possible and has totally been known to throw temper tantrums over fictional characters.

She is super active on GR and, in fact, is probably stalking your status updates right now.