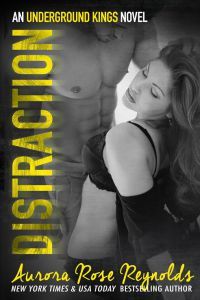 Distraction: The great intensity, novelty, or attractiveness of something other than the object of attention.

Sven is a man who takes pride in his ability to separate himself from his emotions. He’s a man who knows who he is and where he’s going in life, a man who needs no one, because needing someone, anyone, is a weakness.

His past taught him love isn’t enough.

Maggie wants the happily ever after, but has never picked the right men, or stuck around long enough, to build a forever. It’s always been easier to get out early, before emotions make things messy.

When Maggie wakes up naked in Sven’s bed, with no memory of the night before, these two must be honest about their feelings and face their fears, so they can build a future together.

Will love be enough for them to get their happy ending together, or will a threat from outside strike them down before they ever have a chance?

One thought on “Distraction (Underground Kings #3) by Aurora Rose Reynolds”